This page is orphaned, abandoned, and unmaintained.

No further updates will be made to this page, and accuracy is neither expected nor guaranteed. It is left in place solely for historical interest.

Ear stretching is not something that initially appealed to me when I first got into body piercing, it is one of the things that a lot of people associate with people in foreign countrys and has a fairly anti-social, and disturbing feel to it for a lot of people.

Over the past few years though I have begun to wear, progressively, larger and thicker ear rings through one particular hole in my earlobe. So stretching the hole seemed to me to be a natural development - After all people in some places have been doing it for hundreds of years, and who are we to say that this is 'uncivilised', 'barbaric', and 'ugly'?

Like many other people, when I was younger, I got my ear pierced at a hair salon with a gun. Then after a few weeks I switched to wearing a small silver ring.

This was as far as I took my ear, and indeed my piercing, for several years. Then, as I started to get other parts of my body pierced, I removed the small ring, and put in a BCR, as it matched a lot of other piercings that I had. [A BCR is a ball closure ring, used for alomost all body piercings. It is a ring of metal, with a small gap in it, into which fits a small ball.] Some time later I had to remove this ring, to put through my belly button. I had lost the metal ball from that BCR and didn't want to lose the piercing. This meant I had nothing through my ear at all for a few days and I quickly decided that I didn't like being without the ring.

So soon after that I bought another, much preferring rings to wearing studs. The new ring that I got was a slightly thicker ring than the previous one, so I had some difficulty in getting it in, not too much though.

The gradual changing of the rings went on for some time, getting a slightly larger ring in every six months or so, until I had a 4mm thick ring through my lobe.

After being involved in piercing, and even piercing myself, for so long I had seen the variety of jewelry that was starting to become available. I had seen the so-called flesh tunnels, a sort of rivet like thing. Basically a hollow tube that was worn through the ear, when it was place you would be able to see right the way through the ear!

The smallest sized tunnel that I even saw was one with a 5mm hole through it. I decided to get one of these, as my hole was slightly larger than 4mm. I thought that there would be no problem getting it in, even taking into account the added width of the tunnel 'walls'.

It did not turn out to be as easy as all that though. This is a diary of my experiences written at the time, recording what it actually took to get the tunnel in/through(?) my ear.

Today I bought the tunnel, and decided to try to wear it, needless to say that I couldn't get it in. I tried to stretch the hole by using an stretching horn, (A small, curved, piedce of metal that starts being very thin, but getting progressiviely thicker up its length), but the horn itself only went up to 5mm. I couldn't readily see how to get a bigger diameter of hole. So I started to get worried that I might not be able to wear the tunnel, but I had one more go towards the end of the day. Having a bath and allowing the heat of the water to help my ears stretch more helped a little, but it only enabled me to insert one edge of the tunnel a little way.

Today I had the idea of using the stretching horn, whilst I was already wearing a ring through the ear. This would give me a theoretical stretch of 9mm, (5mm horn with the 4mm ring), more than sufficient to get the tunnel through my ear. Unfortunately it was a little bit more painful than I expected, so I was forced to do this very gradually. By the end of the second day I could wear a 4mm ring, and a 1.6mm ring simultaneously. The down side to this was that due to all the trauma that my ear had suffered it had started to swell a little. Even though I had been scrupleously careful in using only sterile jewelry, and washing my hands and ear before and after each stretching increment.

Today I started to get a result, I managed, by gentle manipulation, to wear three rings simultaneously. A 2mm ring was added in addition to those that I was wearing yesterday. This brought the diameter of my ear hole up to 7.6mm. This doesn't really mean very much as the separate rings are not one round one but several, so the total circular diameter of the hole is slightly smaller than this. It did show me though that given enough time I would be able to wear the tunnel. I decided that I didn't want to slow down in my attempts to stretch this hole, even though the swelling noted yesterday had only gone down slightly.

Today I did little, only trying to wear the tunnel. When this was unsucessful I re-applied the three rings that I had worn yesterday.

The longer that I continue to wear the three rings the easier this should get. As the combined weight would naturally stretch the hole to some extent. When trying the tunnel today I managed to get it at least half way through my lobe, from the front, and about a quarter of the way through from the back. But I still had no success in getting it all the way through.

Today my experiments began to take on the air of the grotesque, even for me, as by the end of the day I am wearing three rings - Through the one hole! Having tried unsucessfully to get the tunnel through my ear, I had instead enlarged the hole a little more. So again I have a sore ear tonight! The hole now accomodated three rings, of the diameters; 2.0mm, 2.0mm, and 4mm. This should theoretically be even larger than the tunnel is, but still it will not fit.

I am confident that by the end of tommorow I should be able to wear the tunnel, as the combined weight of the three rings I am currently wearing should be sufficient to stretch the hole a little bit more, hopefully, that little bit more is all that is needed to insert the tunnel.

Today, once again, I tried to insert my tunnel, but even today I couldn't insert it - Actually today it seemed harder even to insert it a little way. The swelling is still present, but it has gone done a little, I think that the rings must have been lieing in a strange way last night. However rather than do the sensible thing and wait for the currently stretched ear to heal a little more, I decided to insert yet another ring through the same hole.

Now I am wearing four earrings, and the total amount of metal crammed through my ear is around about 9.6mm, (Although remember what I said the other day, the hole in my ear is much smaller than this - I still can't wear the tunnel).

Today I managed to get the tunnel in, initially it seemed a little bit harder to insert the start of the tunnel. So I attempted to feed it through over the stretching horn. i.e. Threading the small edge of the horn through the tunnel then, in turn, feeding the horn through my ear. So that the tunnel would go into the ear with the hole held slightly open already. This worked quite well, but the tunnel still wouldn't go all the way through. I had to remove the horn. After removing the horn I thought that I could then remove the partially inserted tunnel, but to no avail, the horn was stuck in the tunnel. (The horn being curved, and the tunnel straight the curve of the horn got stuck). To remove the horn I had to give it a good yank, and this is what actually slid the tunnel into place.

The tunnel has now been in place for about twenty minutes, and the swelling that has been present for the past few days has now gone down even more, so my ear looks a lot happier, only a little redder than usual.

Well all of this was written about a year ago, but now I have managed to enlarge the piercing even further. This is something that I would like to keep doing - even if I am conscious of suddenly having a 'posh' job...

The present piercing fluctuates at around 1cm across. This varys with what I wear through it. Sometimes I'll take out my tunnel, (Or more likely have it fall out when I'm asleep...), and the stretching will shrink a little. Other days it can grow - especially after a nice warm shower, or bath.

As well as having a bigger hole now I also have some nice new ear piercings, including a small ring through the tragus, (1.2mm), and a labret through the middle cartiledge of my ear.

All in all I am happy with the result, though if I had known the amount of difficulty the insertion would have taken I would have started to stretch the ear well in advance of ordering the tunnel. As it is I have stretched the ear gradually for about the last two/three years, and now in a weeks concerted effort I have almost doubled the diameter of the hole through my ear.

Not bad going for someone who has never readly heard much about ear stretching!

I wouldn't recommend the way I have stretched my ear to anybody else as the ideal way to stretch the ear, but I would advocate using the correct items for the job. For example; a good lubricant, a well made stretching horn - designed for body piercing enlargement, sterile jewelry, and a healthy respect for the body, along with a bit of knowledge of the anatomy of the ear.

Actually recently I've been talking to a lot of people who have stretched their piercings and they have generally gone along with the 'wearing lots of jewelry' approach. There have been minor deviations, with some people suggesting melting felt-tip pens, and using that to stretch with. (I tried this, as the melted plastic does turn into a long solid point - But it was too rough for my delicate skin...)

Different shot of the same thing 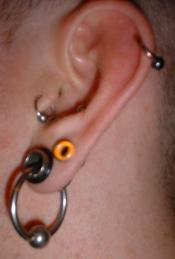 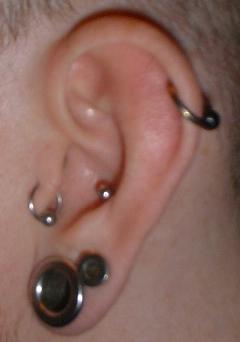 Soon I should be able to get some recent photos taken of my ear - Especially with the labret piercing included, that looks great with a massive spike on the end....